The village of Eyam lies amid the spectacular scenery of the Derbyshire Dales, within the Peak District National Park. On the doorstep of your holiday cottage in Eyam, you will discover wild moorland, and deep valleys and gorges, where superb walking can be enjoyed. Eyam is known as the Plague Village, thanks to its self-imposed isolation to prevent the spread of the bubonic plague during the 17th century. Local landmarks to look out for on self-catering holidays in Eyam include the boundary stone, one of several plague stones, where money soaked in vinegar was placed in exchange for food and medicine. The Miners Arms is a reminder of the village’s industrial past, and remains an atmospheric place for a pint of Derbyshire ale. Nearby, Village Green Café and Eyam Tea Rooms both offer good food and refreshments. By the pretty village green, Church Street Stores sells a range of groceries, including a variety of local produce. You will also find a couple of gift shops, a graceful parish church, and Jumber Brook, which meanders past the village, and into the surrounding countryside. Don’t miss Eyam Hall Craft Centre, housed in a magnificent Jacobean stately home, with gardens and a visitor centre. 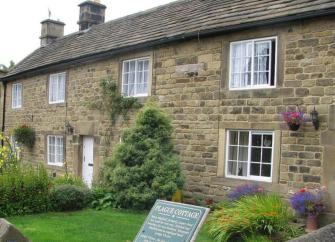