Muir of Ord is a small village in the Highlands of Scotland, on the western border of the Black Isle. It is nine miles west of the city of Inverness, near the southern banks of Logie Burn. The Black Isle is not an island, but a rugged peninsula surrounded by the Cromarty Firth, the Beauly Firth, and the Moray Firth. It is known for its wild forests, stunning beaches and resident pod of dolphins. From your holiday cottage in Muir of Ord, take a wander into the village centre, where you will discover a peaceful rural community. There is a grocery, a couple of cafes, and the Old Arms Hotel, where the bar is the perfect place to try local whiskies. Near the railway station, Castle Hill Henge, or Muir of Ord Fort, is a Neolithic or Bronze Age monument. On the edge of the village, a short stroll from holiday cottages in Muir of Ord, the Glen of Ord distillery is one of the few remaining whisky distilleries on the Black Isle. One of the country’s largest agricultural shows, the Black Isle Show, is held every August, near the village. Nearby, on the northern edge of the peninsula, Cromarty is known for its medieval merchant houses and pretty fishermen’s cottages. 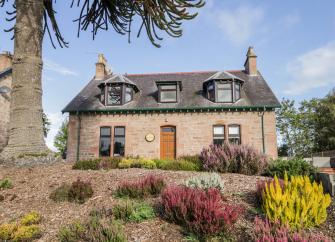 Orrinside is truly Scottish. The rural cottage near Muir of Ord in Ross-Shire sits at the foot of the Scottish Highlands and offers whisky Masterclasses. The pet-friendly cottage also boasts beautiful grounds, authentic décor, a hot tub and open fire, plus accessibility for people with disabilities.